Chinese cities grow and with it, the need for green

Worldwide out of the 47 megacities, China alone counts 17. These are cities with a population in excess of 10 million people. Today over half of the Chinese mainland population lives in cities. Towards 2030, China aims for 70% of its population, about 900 million people, to live in cities. 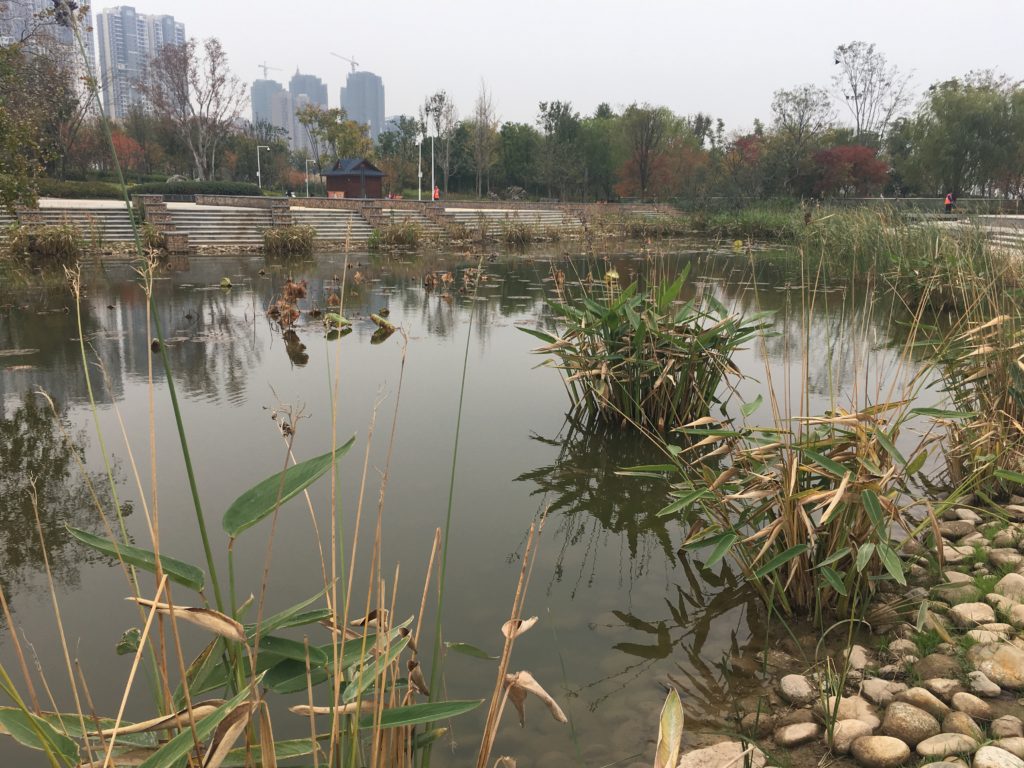 Such numbers can be mindboggling and the ramifications of those urban transformations even more so. These cities require tremendous investments in water supply, waste treatment, energy, transportation and public utility provisions to provide for the growing number of urbanites. And those investments have an impact, particularly on nature.

As part of the GrowGreen project, I joined a mission to Wuhan in Hubei Province, China to explore opportunities for collaboration and exchange on Nature-Based Solutions (NBS) with European cities.

“The GrowGreen project aims to promote climate and water resilient cities by supporting the investment in NBS as part of urban planning by joining forces with cities and experts in Europe and around the world. It aims to influence and inspire solutions based on nature and therefore innovation and systems-thinking play a key part”, said team leader Jonny Sadler, Programme Director of the Manchester Climate Change Agency.

Some key lessons I took home from the GrowGreen China mission:

1.Tapping into cities’ natural capital is not an option, it is a must

In travelling by train from Beijing to Wuhan, I saw endless stretches of high-rise construction sites which will become new cities and towns where the 300 million Chinese now living in rural areas will be relocated to. The idea behind this is that the greatest potential for expanding domestic growth in China lies in its urbanization.

Whilst boosting domestic demand through expanding the number of spending city dwellers may well be strategic, another cheaper and sustainable source for China to tap into for benefits is nature. The ecosystem services provided by nature through for example, wetlands, forests and rivers, can help safeguard urban resilience, people’s health and wellbeing, as well as biodiversity and employment opportunities. Services can include carbon sequestration, water purification, flood mitigation, urban heat reduction, air filtration, and habitat provision to name but a few.

It makes good business sense too. Data shows that for example a 10% increase in tree canopy cover in cities may result in a 3–4°C reduction in ambient temperature and save large amounts of energy and costs in air conditioning during hot summer months. 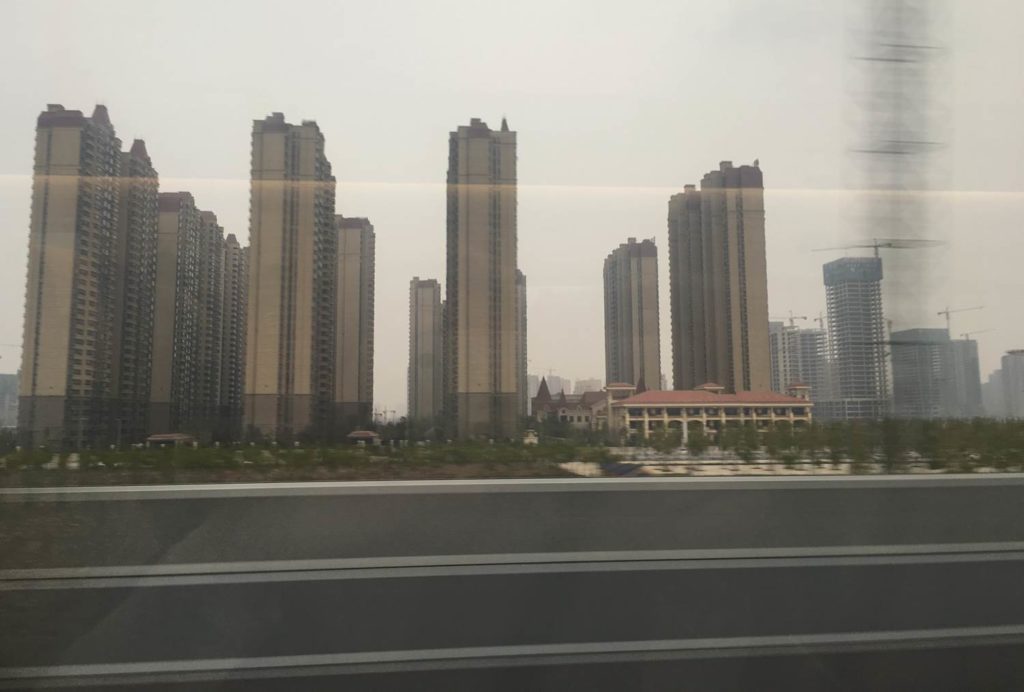 2. Sponge Cities are putting nature in the defence line of climate change

Like many countries around the world, China is concerned about flooding as a consequence of a changing climate. Launched in 2015, the Sponge City Initiative invests in projects that aim to soak up floodwater and improve water quality. The projects are implemented in 30 cities across China. By 2020, China hopes that 80% of its urban areas will absorb and re-use at least 70% of rainwater. To date, these cities have received more than $12 billion for investment in sponge city projects.

Wuhan, China’s second fastest growing city with 11 million people, is located at the confluence of the Han and Yangtze Rivers. The city is at risk of flooding and the majority of the numerous lakes in the city have poor water quality. To address these issues, Wuhan is part of the Sponge Cities programme, in fact it is the largest city of the sponge pilot cities. In visiting some of the demonstration sites, we witnessed several types of green and urban spaces allowing for the infiltration and storage of rainwater, including rain gardens, permeable pavements, bioswales and detention ponds. The Sponge City target in Wuhan is set to 20% of the city by 2020, and 80% by 2030 but since its launch in 2015 Wuhan has already transformed huge areas of the city. Whilst focus is still very much on the external infrastructure fix, urban biodiversity and communities will benefit too.

3. Cities that stick together, stay together…and get ahead

The Economist 2018 City Liveability Index, which considers 30 factors related to safety, health care, educational resources, infrastructure and the environment, found that six of the Top 10 scoring cities are in Australia and Canada. What these have in common are very low population densities. Yet Japan with a high population density also made it into the Top 10 with Osaka and Tokyo. Why is this important? Because each city and setting is different, but in learning from others what works and what doesn’t, cities can adjust, improve and thrive.

Wuhan city and the city of Manchester became sister cities in 1986. Whilst in Wuhan, we (Manchester Climate Change Agency, University of Manchester, and IUCN) met with the Wuhan City Council who has a cooperation agreement with the City of Manchester in urban development and smart city construction. For GrowGreen, the aim is to deepen this collaboration in the area of sharing innovation, both in green infrastructure and urban financing. The prospect now is to invite Wuhan to the GrowGreen Innovative Financing Conference for Green Cities in Manchester in March 2019 and share successes and lessons from their Sponge City Programme with counterparts in Europe. 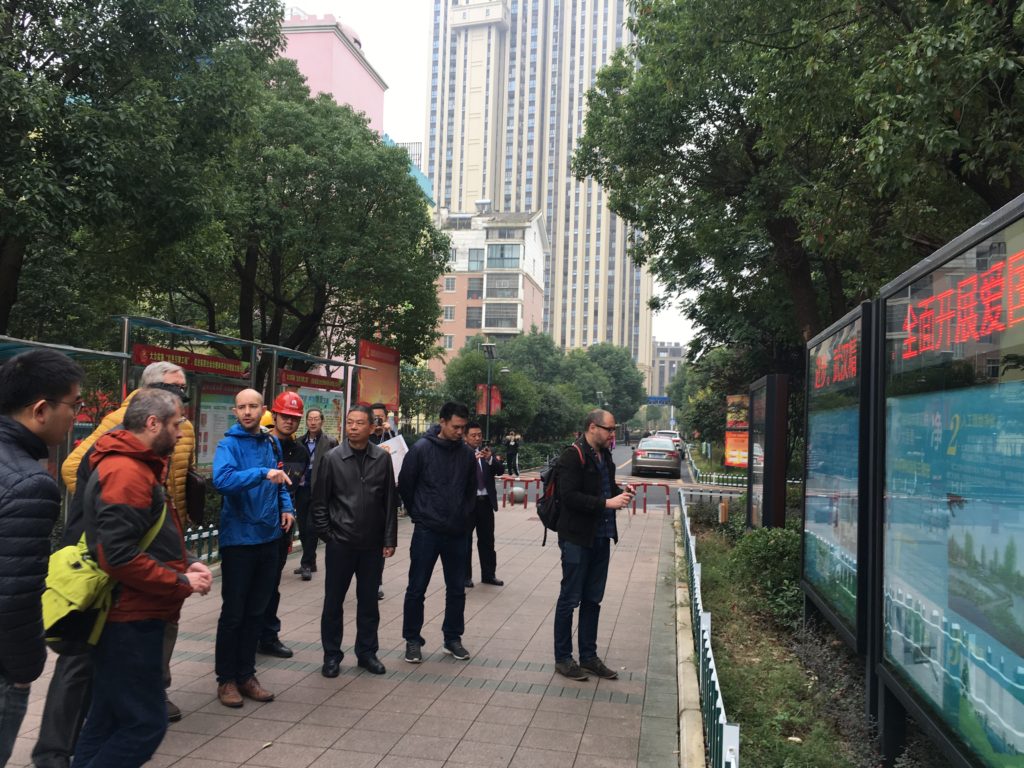 In reflecting on GrowGreen and the exchanges in China, rapid urbanisation is certainly challenging but simultaneously laden with opportunities. In our day and age of communications and access to information, the sharing and learning potential on best practices and innovation between cities holds a lot of promise for a greener urban future.

To borrow a quote from Confucius, “By three methods we may learn wisdom: First, by reflection, which is noblest; Second, by imitation, which is easiest; and third by experience, which is the bitterest.” I think all three are important, but from my observations in Wuhan and its sponge city solutions, learning through reflection from them will benefit many, and this well beyond Hubei and China.

The greenest school in Valencia: a vertical garden and reused water for irrigation

As part of the GrowGreen project, Valencia’s city council has installed a vertical garden in one of the city’s public schools to improve temperature regulation and sound isolation. The initiative contributes to mitigating the “urban heat island effect”, which is a process in which temperatures in cities rise by about 2°C compared to surrounding areas....

The city of Zadar recently presented its Nature-Based Solutions Strategy and its Green Cadastre during a study tour in the city organised as part of the Covenant of Mayors Twinning Programme. The municipal team of the Croatian Covenant town, Zadar, welcomed their peers from the Italian town of Udine on 28th-29th November 2019. This Programme...

Breaking down barriers, making the connection – Cities need to use nature-based solutions to help combat the effects of climate change

The European Week of Regions and Cities conference is the biggest local government gathering in the world. Over 6000 delegates attend, with 600 speakers presenting and showcasing work on a complex and challenging variety of themes over five days of events and activities. Manchester City Council was invited by the European Commission to be part...