Injection of green space in the Benicalap neighbourhood of Valencia

GrowGreen is working in the Benicalap district of Valencia, located on the edge of the Spanish city. The neighbourhood will see a substantial change from the project, with increased green spaces based on innovative designs that contribute to climate change adaptation and offer an improved quality of life to its inhabitants.

Up to six nature-based solutions pilot actions will be implemented, spread across different locations in the neighbourhood. They will improve the connections between the city and its surrounding orchards and gardens, especially to the northeast, and will help to resolve the local population’s everyday problems. For example, their priorities include investing in and supporting the local primary school and promoting spaces for cultural exchange and mutual support. These will be the locations of some of the pilot projects.

One of the pilot actions is a vertical ecosystem, a garden based on a green wall, which is watered with recycled greywater. Its contribution to reducing the ambient temperature will be monitored and the regenerated water will be used to irrigate a nearby green space.

A small sustainable forest, which will offset CO2 emissions, will be created. The new wooded area will create connections with other green areas in the neighbourhood and will provide habitats for the local fauna, supporting biodiversity. Also improving the connections between green spaces in the neighbourhood is a blue-green corridor, made up of a series of linked green pedestrian areas and gardens. The objective is to improve public space by providing shade and improving ventilation using nature. Special permeable pavements for footpaths in the forest and the blue-green corridor will allow rainwater to drain away more slowly. A green roof will help to protect the building from the sun and reduce air conditioning use. Requiring little maintenance, it will passively improve the building’s ambient temperature.

A mobile app is planned, which will offers users simple information, education and awareness about the plants and wildlife in the city. Lastly, the ‘solidarity basket’ aims to connect food producers and consumers from Benicalap, with the goal of identifying potential markets for the local products and studying new marketing channels. 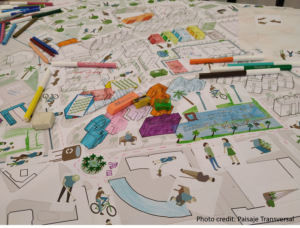 In addition to these six pilot actions, a participatory process called #MésVerdBenicalap (#greenerBenicalap) has been running for the last six months, promoting collaborative actions related to urban sustainability and inviting local people to directly contribute to the designs of the actions. Collaborative workshops, talks, an interactive website, individual and group interviews, questionnaires and mailboxes are being used to understand the community’s problems and needs. Watch our video to find out more.

A contest for collaborative and green initiatives will be soon be launched to collect even more ideas from the local population. 50,000 euros will be distributed amongst the winners to collaboratively tackle the neighbourhood’s issues, including energy poverty and heat stress. Winners will have to show innovation, encourage participation in the design, mainstream gender considerations, demonstrate capacity to generate employment, or illustrate values of the social and solidarity economy.

The #MésVerdBenicalap process also informs citizens of GrowGreen’s aims. “We wanted to design the pilot projects with the citizens. Above all, we want listen to them and let them be immersed in in the process so that the actions improve the quality of life in the neighbourhood”, said Roberto Jaramillo, the Councillor for Innovation of Valencia City Council. He added, “The project reinforces and builds the social vision of Benicalap as a district connected to the neighbouring gardens and orchards, as an identity value and as a strategy against climate change. We believe that the project will be an important wake-up call for the neighbourhood, changing its appearance and making it a model for the participatory creation of green spaces and sustainable actions”.

The full story (in Spanish) is here.

A plethora of nature-based solutions are now in place in the GrowGreen cities – from a park that drinks water in Manchester, to a green street in Wroclaw, and a green roof in Valencia – and yet more are to come. In Brest, a floodable park is nearing completion, which will give local people and...

West Gorton, Manchester, gets a new park that drinks water

Manchester’s West Gorton neighbourhood now has a new climate resilient park, one of GrowGreen’s demonstration projects. The park is designed with nature-based solutions to ‘drink’ and absorb rainwater, reducing flood risk in the surrounding area. The local residents, including elderly people and schoolkids, helped to design the park, which includes areas for people to meet...

The GrowGreen team in Modena is working on designs for nature-based treatment of canal waters from the urbanised eastern area of the city. The proposed nature-based solutions are being used for the first time by the City of Modena and the public-private partnership that manages water for the city. The project aims to reduce flood...