GrowGreen in the Italian city of Modena has been studying the city’s climate and water-related problems. A better understanding of flooding and heat stress helps us make an effective plan for nature-based solutions across the city. We talked to the GrowGreen team in Modena to learn more. 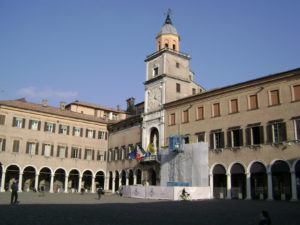 w do we expect climate change to affect Modena?

From observed data for the province of Modena, we’ve found that the temperature has increased. But in the city itself, we see that temperatures have stabilised in recent years, possibly due to the policies implemented in the municipality over the last 30 years. We’ve also observed an increase in dry periods, concentrated in the summer season but sometimes even occurring in winter, which has negative implications for agricultural activities and for water reserves. We have seen rapid thaws immediately downstream of snowy areas, which, if it also rains, can cause high river flows and floods.

These changes affect the population’s behaviour, at not only the institutional level but also even by individual citizens. They’ve become aware of the risks and of the need to create defences for the most damaging events, both in relation to temperature and flooding. Awareness is also increasing that even individual behaviours and good practices by the city’s governance and management structures can contribute to reducing damage from climate change.

How are you studying the effects of climate change?

The main problem for the city is flood risk, particularly from the Naviglio Canal, which carries much of the city’s urban drainage water into the Panaro River. To analyse this, we assessed the river basins around Modena, especially their morphology and land use; improved models of the city’s network of rivers, canals and sewers; and assessed how vulnerable the city’s valley is to the danger of flooding.

We have found it useful to develop a pilot project, a solution for flooding that we are studying at district level. We will add a micro-grid to the canal to catch rubbish and debris, meaning that rainwater receives some preliminary treatment. The effect will be to reduce both floods and the organic pollution in the canal. In the future, it will be possible to reuse water for irrigation or washing streets.

For many years, Modena has applied the rule that any changes to the city must not increase flood flows. Where is this rule applied? In new settlements and for soil waterproofing. In what way? With the use of permeable green areas and natural ‘tanks’ that collect floodwater and slow its flow, thus reducing the risk of flooding in built-up areas. Now we are evaluating ways to improve the actions already taken at site level, to complement the pilot project. How will we do it? By developing actions for improving water quality and by reusing water to mitigate atmospheric pollution and high temperatures in summer. This is a suggestion from our stakeholders.

What have you found?

The analysis phase has focused on how the climate and hydrology of the river basin have changed over the last 60 years (1961-2018) based on the available official data that is representative of the territory around Modena. We looked at changes in the urbanised area; rainfall; daily temperatures; the water balance in the soil; flows in the rivers, canals and drainage networks; and the main flood events.

We found that urbanisation in Modena has increased from 1% in the early 19th century to almost 25% at the end of the 20th century. There has been a slight decrease in summer rainfall, with fairly prolonged periods of drought, alternating with a slight increase in intense rainfall, particularly during the autumn and in the mountains, a phenomenon that causes floods. Therefore, the rainfall pattern is now characterised by a decrease in rain events but an increase in their intensity. Daily temperatures have increased from 1961 to 2018, which causes an increase in the number of days in a year above 30°C.

A water deficit in the soil has been appearing more often during the summer months, a trend that is also expanding to the spring and autumn seasons. In this context, recharging the soil during the wet season is becoming a problem. On the other hand, the number of river floods increased over the last two centuries, with a peak in the number of events in the 1960s.

During the period we studied, the river basins were urbanised and agriculture became mechanised. From 1970 to 2000, there were increases in flood volumes, lowering of riverbed levels, and waterproofing of soils. These are the reasons why the risk of flooding has been increasing.

How is this information useful for Modena’s nature-based solutions strategy?

The information we’ve found is an indication of how climate change is affecting Modena, with solutions including both nature-based solutions and grey infrastructure. We are increasingly assuming defensive and adaptive behaviours for climate change, to build our resilience. Our actions are aimed at reducing the degree of vulnerability to climate change by trying, as far as possible, to limit the danger we face.

A plethora of nature-based solutions are now in place in the GrowGreen cities – from a park that drinks water in Manchester, to a green street in Wroclaw, and a green roof in Valencia – and yet more are to come. In Brest, a floodable park is nearing completion, which will give local people and...

West Gorton, Manchester, gets a new park that drinks water

Manchester’s West Gorton neighbourhood now has a new climate resilient park, one of GrowGreen’s demonstration projects. The park is designed with nature-based solutions to ‘drink’ and absorb rainwater, reducing flood risk in the surrounding area. The local residents, including elderly people and schoolkids, helped to design the park, which includes areas for people to meet...

The GrowGreen team in Modena is working on designs for nature-based treatment of canal waters from the urbanised eastern area of the city. The proposed nature-based solutions are being used for the first time by the City of Modena and the public-private partnership that manages water for the city. The project aims to reduce flood...