The online international Climate Adaptation Summit (CAS) 2021 on 25 and 26 January, hosted by the Netherlands, convened global leaders and local stakeholders. It saw the launch of a comprehensive Adaptation Action Agenda, setting out clear commitments to deliver concrete new endeavors and partnerships to make our world more resilient to the effects of climate change. Nature-based Solutions was one of the main action themes of the event.

In the CAS NBS session insights into actions and outcomes were presented that the nature-based solutions action track has advanced, under the leadership of Canada and Mexico, in partnership with the Global Environment Facility (GEF), UN Environment Programme (UNEP), World Resources Institute (WRI), and Global Centre on Adaptation. The action track demonstrates the achievements of five vanguard key countries Peru, Canada, Mexico, Ethiopia, and the Netherlands implementation of NBS.

This resulted in three key areas for action:

The HON Johnathan Wilkinson, Canada’s Minister of Environment and Climate Change said: ‘We have worked to demonstrate the potential of NBS at scale to inspire uptake’. Canada demonstrated how the Indigenous Protected conserved area established under the Canada nature fund, an area of over 14,000 kilometers has demonstrated NBS benefits to address climate change, biodiversity loss, desertification, natural disasters,  and to create sustainable management of natural resources, based on scientific and indigenous knowledge, social participation that is socially just.’.

The Global Centre on Adaptation one of the partners working with Mexico and Canada to transform the global agenda on NBS as part of the Action Track identified that every $1 invested into NBS can generate up to $10 in benefits and that 1.2 billion people rely on healthy ecosystems for their livelihood.

Dr. Inger Andersen Secretary-General of the United Nations Environment Program highlighted that efforts to adapt and mitigate have not been equally balanced so far, as required by the Paris agreement, which states ‘scaling up finance in the balance between adaptation and mitigation’.  She highlights three actions. ‘Adaptation finance is only 5% of global finance, more is needed, and use public-private partnerships to promote action integrating NBS in Nationally Determined Contributions, as today only 17% of NDCs make reference to NBS. The climate change and biodiversity agenda’s need to be united, investing in NBS means investing in our own future for biodiversity, climate, people, our economy and our future health’.

Three representatives of Indigenous Peoples highlighted the key role that indigenous people play in protecting and promoting nature. NBS should always respect indigenous people’s rights and including their participation and inclusion of their knowledge, opinions and local ecological knowledge should be incorporated into NBS knowledge.

Opevemi Eluiulo from Youth for the Environment, highlighted the importance of dialogue between young professionals and policy/decision-makers during both the Action Track and at the Climate adaptation summit, ‘Young people are represented across the globe… we have an understanding of what is obtainable within our local communities’.

Financing NBS was a key element of the Action Track, focusing on the need to build a better understanding of the business case for investing in NBS, the need to obtain and use climate information for motivating and focusing private investment, and the need to create the enabling conditions for private investment in adaptation including incentives and blended finance to share risk.

The CAS 2021, highlighted a number of innovative financing mechanisms for NBS. The Special Climate Change Fund (SCCF) of the GEF approved a $2 million novel project to support the monetary valuation of Nature‐Based Infrastructure (NBI), with the objective of demonstrating its economic case and catalysing more public and private investment The project will demonstrate monetary valuation of up to 46 nature‐based infrastructure investments, and develop a massive open online course and database to support future valuations.

A new Global Ecosystem‐based Adaptation Fund, supported by Germany and implemented by UNEP and the International Union for Conservation of Nature (IUCN), was developed with an initial capitalization of 15 million euros, and the first call for proposals is expected in 2021. Through a rapid delivery mechanism, the Fund will provide seed capital that aims to catalyse the scaling up of ecosystem‐based adaptation. The Fund will focus on support to non‐state actors, with the expectation that they will often need to work closely with national and local governments. 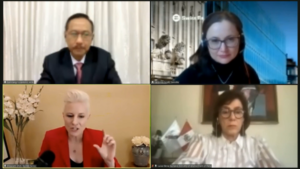 A Project Preparation Facility (PPF) is designed that will build a pipeline of city‐led NBS projects for climate adaptation that are positioned to access large‐scale infrastructure finance and capital markets. The facility will provide financial and technical assistance to city leadership, civil society, and infrastructure operators to plan and design bankable NBS for climate resilience and human well‐ being.

Bambang Susantono from the Asian Development Bank noted that ‘Financing is necessary but not sufficient’, policy-based loans encourage NBS and we finance innovative NBS projects, blended financing, and green bonds. We promote good practice and knowledge, capacity building for planning infrastructure for example in ADB have worked with the Vietnam government to establish climate-resilient road design standards that incorporate NBS. Urban climate-resilient trust fund which helps with community infrastructure.

R.T HON Anna-Marie Trevelvanthe UK Minister of State for Energy and Clean Growth, spoke about the interrelated challenges of poverty and global climate change and biodiversity loss, ‘harnessing the power of nature we can take on this triple challenge’.  Anna-Marie summarised that NBS could offer significant economic benefits while strengthening climate resilience, providing around 1/3 of the most cost-effective solutions to climate change. Nature is the foundation of the global economy, the World Economic Forum estimates that over half the world GDP 44 trillion dollars are reliant on ecosystem services, and yet despite our dependence on nature and the huge potential of NBS it is estimated that they attract only 3% of global climate funds.

This session has highlighted that national governments and financial institutes should value and recognise the key role that NBS can play during the covid-19 recovery and in building a resilient sustainable future.

A full recording of the CAS NBS session can be found here: