Working on nature-based solutions requires partnerships and collaborations across the many municipal departments and external stakeholders involved, such as departments responsible for green spaces, stormwater/flood management, highways, health and many others. However, when each department has its own culture and way of working, it can be difficult to build partnerships between them. 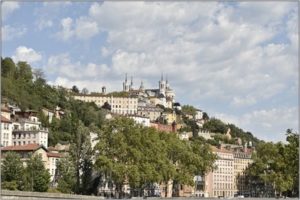 This online training session, hosted on 18th May, aimed to discuss this challenge and learn from the experiences of several cities. It featured speakers from the Regional Agency for Biodiversity of the Paris Region, Greater Lyon and the City of Malmo, and was hosted by IUCN European Regional Office.

Gilles Lecuir, of the Regional Agency for Biodiversity of the Paris Region, presented examples drawn from the network of cities involved in the French Capital of Biodiversity Award and how non-typical departments and stakeholders were engaged. For example, in the city of Niort the municipal service responsible for registering births and deaths proposed to create a natural cemetery, which was supported by the mayor. In this case, the main stakeholders were families and funeral directors. A charter for families was produced to encourage biodiversity-friendly practices in the cemetery. The second example came from Boulogne-Billancourt, where a vegetated roof was installed on a school. The elected municipal councillor for biodiversity drove this project, again with the multiple stakeholders associated with the school.

Frédéric Ségur of Greater Lyon presented the Lyon Metropole Canopy Plan, which, with the Permeable City project, is linked to the city’s climate change adaptation plan and aims to tackle heatwaves and the urban heat island effect by increasing tree canopy cover to 30% by 2030. The Canopy Plan is transdisciplinary and involves several different departments working together, along with numerous public and private stakeholders. It therefore takes an integrated approach, considering how trees interact with water, heat and soils. Urban projects are seen as an opportunity for experimentation, such as in how water can be recovered and fertile soil can be retained.

Helen Nilsson of the City of Malmo presented the city’s Cloudburst Plan and its Coastal City of the Future Action Plan. The Cloudburst Plan was initiated after a large storm in 2014. It involves several departments to use ‘multifunctional solutions’ to managing stormwater, which also contribute to improving recreational spaces, climate and traffic environment. The Coastal City of the Future Action Plan aims to strengthen Malmo’s role as a coastal city. In a densifying city, it is critical to ensure that green spaces are multi-functional, making a more efficient use of space and bringing in the relevant municipal departments.

During the question and answer session, many strategies for engaging across departments were discussed:

• A network of interlinked plans and policies can contribute to creating a common urban culture across a city.
• Technical days, visits to interesting sites, webinars and other events can support this common culture by allowing people to share experiences and ideas, and to build relationships.
• Building relationships with individuals in other departments takes time, especially for staff to make the case for engaging up the decision-making hierarchy.
• The goals of a nature-based solutions strategy can be integrated into departmental goals, therefore building accountability and ensuring progress can be regularly monitored.
• Establishing a competition between cities can help to inspire action, especially if the questionnaire/competition application requires inter-departmental collaboration to complete.
• When discussing nature-based solutions, ensuring that the benefits for each department/stakeholder group are highlighted helps to built support. Linking nature-based solutions to health and wellbeing will be important during the recovery from COVID19.
• Citizens can also be engaged in the topic, for example through citizen science programmes for gardeners.

The webinar recording is available here. The slides are available below: