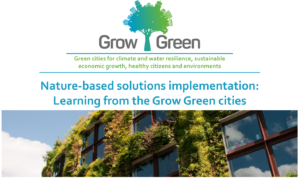 The online event, moderated by Claire Warmenbol, IUCN Global Water Programme, aimed to increase understanding of the multiple benefits of urban NBS, as well as the challenges and opportunities encountered in order to guide and encourage the deployment of NBS in other cities and regions.

The webinar started with an introduction to the GrowGreen project by Susanna Gionfra, IUCN European Regional Office, including the objectives and the vision of the project as well as some insights on the lessons learnt, and the challenges encountered by the GrowGreen cities and the Municipality of Campinas.

The webinar introduced a journey around Europe, and all the way to Brazil, to present the stories of several urban nature-based solutions projects. 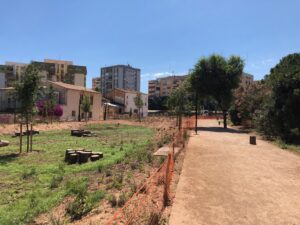 The journey started in Valencia, Spain with a video on the projects implemented in the city. Ignacio Lacomba, Head of Sustainable Gardening Service, Valencia City Council introduced the projects by giving an overview on the Benicalap Ciudad Fallera District, where the pilot projects have been implemented. This is an economically depressed area, with 16% of immigration, 34% of unemployment and an aging population. The pilot projects implemented in Valencia are: a vertical ecosystem in a public school, a sustainable small forest to compensate the emissions of the district, a green-blue corridor to upscale the forest approach towards the urban areas, and a green roof in an elderly building to tackle thermal stress. In addition, spaces for collaboration have been established to ensure the engagement of citizens in the design, implementation and evaluation of the demonstration projects. These spaces have been designed following two main methodologies: “Listen and transform” and “Doing cities with people”. Another interesting project has been the App Biodiversity to learn and create awareness about local biodiversity. Data on the efficiency of the different pilot projects were presented. For instance, the green roof contributed to a decrease in air conditioning electricity consumption by 20-25%, generating annual net savings of 1.500-2.000 Kwh of electricity, so 375-500 kg of CO2. Finally, the green roof helped in diminishing the temperature: while with the gravel roof the average temperature was of 23-40°C, the green roof achieved 22-26°C. Further information on Valencia’s demonstration projects is available here. 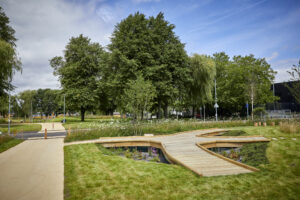 The journey continued to the West Gorton Community Park in Manchester, UK. Kate Fallon, a landscape architect and Project Manager at Manchester City Council, presented the project which was developed in the suburban area of West Gorton District, started in 2018 and officially opened in 2020. The park, part of the regeneration efforts in the area, is composed by three parts: the Woodland, the Meadow, and the Community City Plaza. In the three parts of the park there is also an underlying drainage design. The park includes a large play area with permeable safety surfacing and a basketball court with a non-permeable surface which re-directs rainfall towards the drainage channel into a bio-retention tree-pit. Other NBS designs include swales and check dams to slow down the water flow. The design was developed after extensive consultations and workshops with the citizens of the area. The objective of such an approach was to ensure that citizens’ expectations were met. As regards to the lessons learnt, a number of KPIs are continuously monitored, showing good progress on health and well-being, and on the functionality of the NBS to tackle heat stress, enhance biodiversity and reduce flooding. For instance, the Park worked successfully to prevent flooding during Storm Christoph in 2020.  This project is also well positioned in the Manchester’s Green and Blue Infrastructure Strategy. As regards to the challenges encountered, these included the complexity of the installation which required supervision, its maintenance, and the difficulty in procuring landscape architects and contractors. More information on the features of the West Gorton Community Park is available here and here. 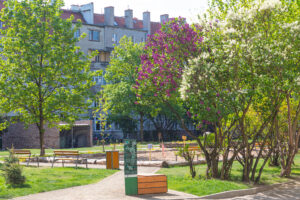 After the United Kingdom, the journey continued to Wroclaw, Poland with the presentation by Malgorzata Bartyna-Zielińska, from Wroclaw City Hall. Here, the projects included a green street and seven pocket parks. All these projects present different NBS features as they were based on the needs of the citizens in the different areas. For this reason, citizens were engaged from the proposal stage in 2016. The demonstration projects were concluded in 2020. One demonstration project focused on biodiversity and included a green wall, a rainwater barrel and a permeable surface. Another demonstration project focused on rainwater management and introduced rains gardens and swales, and an access road with a permeable surface which allowed for over 90% of water to be managed on the ground. The biggest challenge related to the implementation of the Green Street, which aimed to transform a concrete street by introducing parklets, greenery and converting the sidewalk into permeable surfaces. Overall, the challenges encountered included the engagement and on-boarding of citizens, educating citizens as well as architects on NBS, the maintenance of the projects, and public procurement. A tour of Wroclaw’s demonstration projects is available in this video.

The journey concluded in Campinas, Brazil with the presentation of Gabriel Dias Mangolini Neves, Campinas City Hall on the Green Social Areas Index used in the city for the implementation of Linear Parks. The Green Municipal Plan, published in 2016, aimed to plan the conservation of green areas in a 10-year framework. For this purpose, an analysis was carried out of the green areas with social functions in the city through the Green Social Areas Index, and it was found that only 6.2 m2/inhabitant of green social areas were available in 2016, showing also large imbalances on the distribution and accessibility to these areas as 73% of districts had 0m2/inhabitant. Linear parks were chosen as NBS to maintain and recover biodiversity, address rainwater management, ecosystem integration, and promote environmental educational in the city. The Linear Parks Programme was implemented to establish 49 linear parks throughout the urban area. The mapping indicated where new linear parks should be planned, designed and implemented. The projection for the Green Social Areas index with this programme resulted in 12 m2/inhabitant of green social areas in 2025. Crucial to the success of the programme was the consultation in the municipal urban planning and the consideration of the demands and local knowledge of civil society.

After hearing about the lessons learnt by the cities, and the challenges encountered, the audience was asked to contribute by sharing their views on the main barriers to the implementation of NBS projects in cities. Lack of knowledge, funding and policy resulted as the main challenges.

The webinar concluded with a panel discussion moderated by Claire Warmenbol. The panellists addressed questions from the audience concerning the benefits of the NBS projects, the engagement of citizens in their design, and their reactions after their completion.

Citizen engagement was a key component of all the NBS projects presented . In many occasions, there was resistance from the community on some aspects of the NBS projects, as was the case in Wroclaw and in Manchester. However, in both cases, citizens’ opinions changed after the completion of the projects. Education about climate change and the role of NBS helped improve citizens’ acceptance and involvement in the projects.

As regards to the benefits of the NBS projects to society, these are currently being monitored. In the case of Manchester, a number of indicators are being used to monitor the health and well-being impacts of the West Gorton Community Parks, for instance assessing the frequency of the visits, as well as the type of interactions of the citizens with the park. In the case of Valencia, the demonstration projects have ensured a special emphasis on co-design and co-creation with the citizens to ensure their demands were met. Further, in Campinas, the Linear Parks Programme has contributed to meet the demands of the community, increasing their sense of engagement in the city’ social programs.

Overall, the NBS projects contribute to demonstrating the feasibility and success of NBS in cities to address societal challenges, encouraging replication in other municipalities, and ensuring their integration in urban plans and strategies.