The online event, moderated by Susanna Gionfra, from IUCN European Regional Office, aimed to shed light on the drivers behind the cities’ decision to develop NBS strategies, the different development processes, present the achievements and the lessons learnt, and discuss with the audience the barriers and opportunities for NBS strategy development in cities. 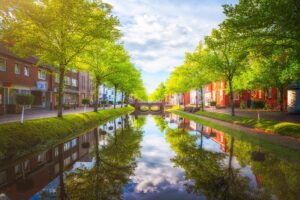 The webinar started with an intervention by Claire Warmenbol, from IUCN Global Water Programme, who provided an introductory presentation of the objectives of the Grow Green project.

Igone Garcia, Project Manager and Senior researcher at Tecnalia, provided an overview on the Green Cities Framework (GCF). The Green Cities Framework takes cities through the different elements needed to develop a successful strategy for nature-based solutions, ensuring the final outcome is grounded in evidence, co-developed with stakeholders and easy to put into practice. On the basis of the GCF, the GrowGreen cities have followed different approaches in developing their own NBS strategy. For instance, Manchester chose a bottom-up approach, using NBS as catalyser; on the contrary, Valencia and Brest have developed NBS strategy initiatives, using a top-down approach. Similarly, Modena has based its strategy on a top-down approach focusing on risk mitigation, while Zadar adopted a top-down greening approach. Finally, Wroclaw has used a combined approach, focusing on a society-driven Climate Adaptation Plan.

The event continued with the presentation of the Rainwater and Sewer Network by Nicolas Floch, responsible for Stormwater Management in the city of Brest. A French 2015 degree requires urban areas to be equipped with a combined sanitation system to reduce the volume, flows or time to drain sewer networks into the natural environment to less than 5%. The improvements proposed by Brest has are the construction of a combined sewerage system based on a constant canalization and adding a correctly sized basin, and the disconnection of active surfaces in order to reduce the size of the funnel by infiltrating the cleanest rainwater as close as possible to where it falls. A balance has been defined between basins and infiltrated water. An action plan was presented that establishes the conformity of the unitary system over a period of 15 years based on two areas of intervention: the construction of storage and return basins and the disconnection of active surfaces. The vision to develop the NBS strategy needed to find a good balance between technical work on the sanitation network and the land use planning.

A joint intervention from Adelio Pagotto, Hydraulic Engineer and the geologist Valentina Tavaglione at Modena City Council, provided an overview of the Modena NBS Strategy. The city has based its strategy on the two main challenges it faces: floods and heat waves. NBS were chosen as the best environmental response to climate change through the implementation of more green areas, soil permeability and hydraulic invariance. The Modena strategy to reduce floods and related damage and to contain heat waves and heat island is articulated on three levels: city, district and site. The combined actions on these areas offer solutions to the issues of interest and add environmental and social benefits. Regarding flood issues, the solutions implemented were diversified between urban and green agricultural areas as well as with a specific targeted effect in relation to the territorial level of application. As regards to the heat island and heat waves phenomena, an urban experimental laboratory has been put in place to understand how to stimulate the presence of trees that can interrupt urban canopy, create preferential air circulation and cool the environment. The selected NBS included green roofs, vertical greening systems, urban and peri urban parks and forests, also in combination with grey infrastructure, such as cold or white roofs and floors, or the installation of refreshing fountains.

Finally, Zana Klaric, the Head of Sector Environment Protection in the Zadar City Council, presented the pilot project of the city of Zadar: the Green Cadastre, a map of the green spaces in the city. The Cadastre was set on the official web page of the city of Zadar in 2018, providing data on each tree, blush or lawn (e.g. tree and trunk height, health condition, treetop diameter, visible damage and a picture). The city’s Action Plan is part of the already existing policies, such as the Climate Change Adaptation Strategy of the Republic of Croatia for the period up to 2040 (adopted in 2020), and the Air Protection, Ozone Layer, Climate Change Mitigation and Climate Change Adaptation Program for the city of Zadar for the period 2020-2023 (adopted in 2020). After consultations with Research and academia, industries and citizens, 22 measures were defined, including tree planting, the creation of retention-infiltration areas within the rainwater drainage system and the installation of permeable surfaces.

After hearing about the experiences of the cities, the audience was asked to contribute by sharing their views on the main barriers to the development of NBS strategies in cities. Lack of resources, funding, political will and awareness were mentioned as the main challenges. 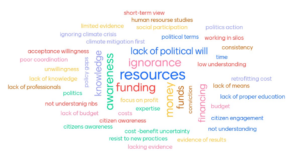 The event concluded with a Q&A session among participants and speakers, moderated by Susanna Gionfra. The panellists addressed questions from the audience concerning the NBS strategies implemented and the engagement of citizens in them.

The engagement of local stakeholders is key in the development of the strategies, to ensure that the right needs are identified and addressed. Similarly, the choice of the nature-based solutions needs to be based on an assessment of such needs, in consultation with the local stakeholders as well as with local experts and professionals for the selection of the sites and types of solutions (e.g. which tree species to plant and for what purpose).

Shifting from a traditional city to a green city that puts green areas at its core is challenge common to many cities which is gradually addressed by increasing the evidence and knowledge on the available solutions and associated benefits to the environment, society and the economy.